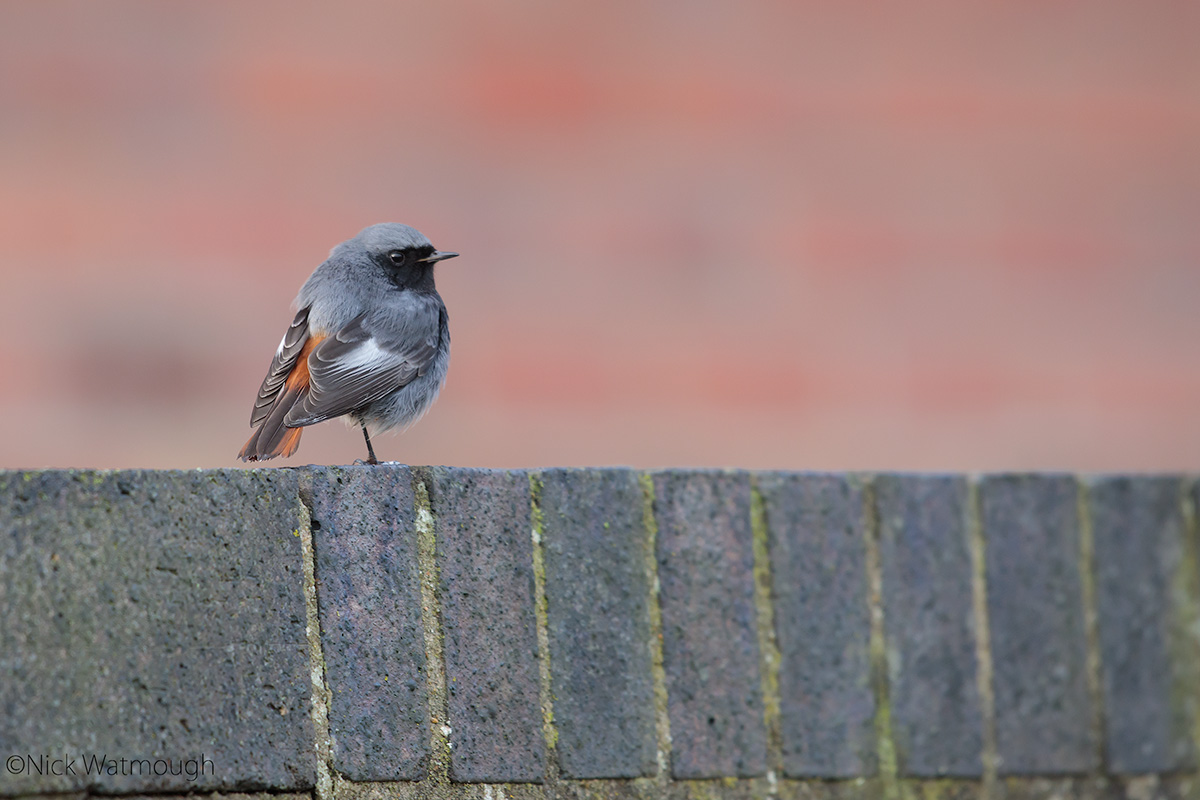 After a difficult couple of weeks it was nice to have a morning out with Graham. Given our time constraints  and Graham’s love of chats there was only ever going to be one destination; Sheringham where a lovely confiding male Black Redstart has been frequenting the seafront RNLI carpark.  We arrived at the car park, a bit of waste ground next to the a block of flat prophetically named Upcher Court where the gaggle of birders/toggers suggested the was not that far away  In order to photograph it at eye level against a clean background we cut the height of the tripods and lay on the floor – for as long as we could stay in contact with the bitterly cold ground before having to get up and walk around.

The approach worked well as the bird  dropped to a favoured area of grass no doubt encouraged by the meal worms scattered by a benevolent local photographer.

Ironically whilst we were there a bit of furore broke out on Twitter in response to news that the long staying Desert Wheatear near Whitby had been predated with some posters quick to blame supplementary feeding by photographers for its untimely demise. So should we resort to supplementary feeding in order to get good images?  Many must think it is OK as since I first encountered this practice at another Desert Wheatear , at Horsey in November 2008, and it is something that has become increasingly commonplace in the UK.

I must admit to not being entirely convinced. Given enough time, space and cautious movements by their observers small chats quickly get used to humans and are also quite adept at finding their own food sources.  For example the long-staying Eastern Black Redstart in Cleveland last winter found plenty of insects in its favourite patch of wrack strewn boulders and was very tolerant of a steady stream of admirers during its four month stay.  And another Desert Wheatear, this time at Lowestoft in November 2014 would with patience walk up to you!

On the other hand supplementary feeding raises awareness of birds and their conservation as well as supporting vulnerable populations during hard weather. Where such activities exist photographers are more than happy to take advantage.  For instance how many world birders would have Antpittas on their lists and good photos if it was not for the ground breaking efforts of Angel Paz in Ecuador? And we all love feeding stations whether it is for Willow Tits in Northern England, Hummingbirds in the Neotropics or Rosy Finches in Colorado we are all more than happy to turn up with our cameras and click away. Speaking of Rosy Finches – one appeared at a feeder in front of a hide on the Nosappu Penninsular on Hokkaido last winter even before my Japanese companions had emptied a tub if sunflower seeds on the feeding station!

Like many aspects of birding it comes down to common sense and above everything else the welfare of the bird.  If it is possible to supplement a bird’s normal food supply in a way that does not make it dependent and susceptible to predation fair enough.  However  that is no reason to suspend the principles of good field craft and behave in a way that prevents the bird from attending the food supply and deprives others the opportunity to observe/photograph/enjoy it in their own way.

Meanwhile back in Sheringham after an hour or so of enjoying the Black Redstart Graham and I were frozen to the bone and went in search of a cafe.  Failing miserably in Sheringham we drove along the coast to Cromer and eventually found refuge and a warm welcome in the excellent Crab Pot Cafe where we enjoyed some supplementary feeding of the Full English variety.