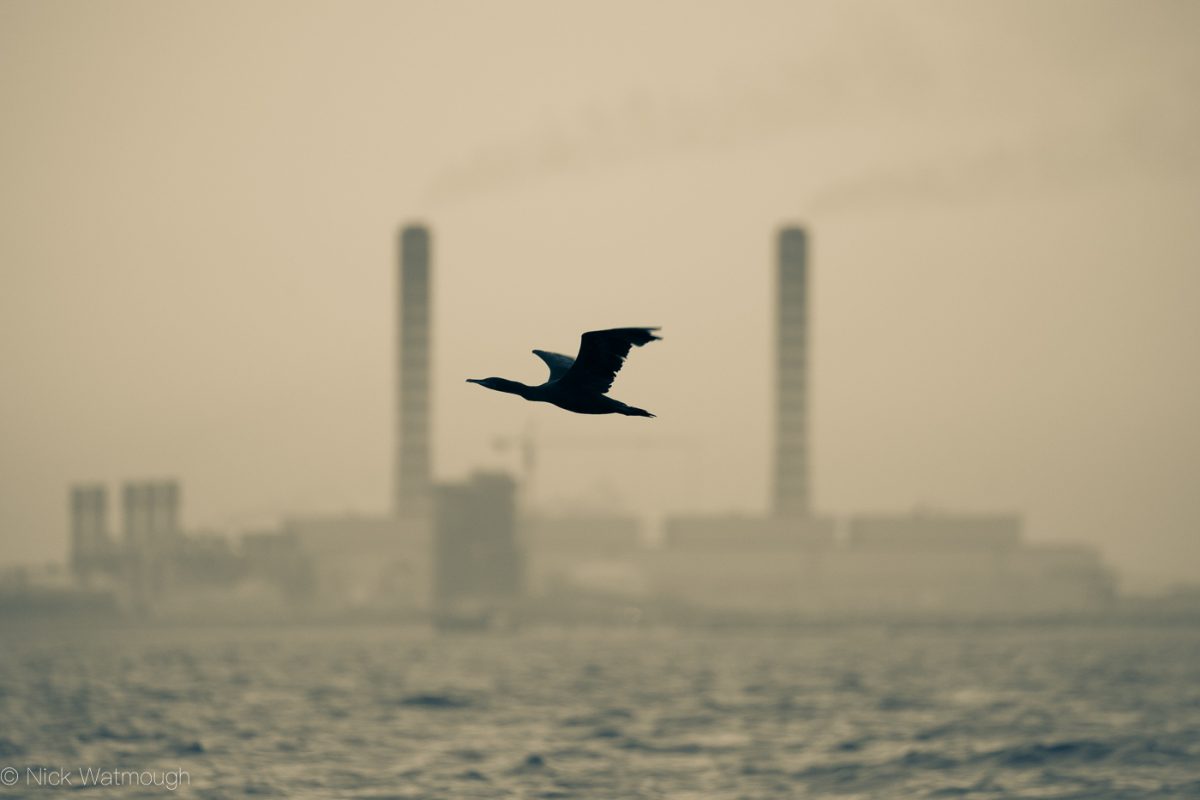 Never play cards with with Graham! Day five saw an earlier than usual start and it was my turn at the wheel for the long drive South to the port  of Al Khiran; the starting point for our boat trip into the Persian Gulf.  The main highway South to Saudi Arabia had levels of construction that made semi-permenant roadworks on the UK motorway system look like minor maintenance.  The result being that we couldn’t find anywhere that was open for coffee and AbdulRahman got ever so slightly lost.  As we reorientated before hitting the Saudi border by making a U-turn  I was overtaken on the inside at about 120 mph by a SUV that came from nowhere and scared the living daylights out of Graham in the passenger seat.

Which meant that by the time we got to the harbour we were more than ready for a quiet cup of coffee and a cracking open our packed breakfasts.  On the quay we met up with a group of four Danish birders who were travelling independently, but joining us for the day trip. As we ate our skipper took the opportunity to refuel and on his return we were ready to board. This proved a little tricky on the very low tide, but was quickly done and we were soon steaming towards the calm blue waters of the Gulf.

Barely 20 minutes out of the harbour we encountered a mixed group of terns; mainly Lesser Crested and Bridled with the odd Greater Crested and Little thrown in.  Because they were actively feeding it was not easy for the skipper to keep up with them and keep the sun in best position for viewing/photography.  And after a very enjoyable twenty minutes we moved  on.

Thereafter our strategy was to locate a series of navigational buoys each of which held a gang of loafing terns.  Without exception  these took off as we approached, flew around the boat offering excellent photographic opportunities and returned to their station when we moved on.  This was a real treat as before this trip I had seen just a single Bridled Tern, on Angelsey in 1988,  and one Lesser Crested – “Elsie” (the returning Farne Islands Bird),  who I squeezed into one hectic week in July 1989 when I returned from Colorado for my PhD graduation and to get married.

After exploring several buoys we headed for Umm Al-Maradim Island a small island (0.5 x 0.5 km) lying in deep water on the southern edge of Kuwaiti territorial waters – several mobile phones switched to Saudi networks.  It is home to a lighthouse and a police station and is notable for being the second piece of Kuwaiti territory to be liberated in the Gulf War on 29th January 1991 when it was captured by a task force of US Marines.

The island has a small deep water harbour and we found several traditional Dhows moored offshore. presumably preparing to fish.

The low tide allowed us to disembark on the sandy West side of the island via a set of stepladders that AbdulRaham had brought for the purpose.  There were good numbers of Redstarts and other chats along with four species of shrike including the only “Steppe” Great Grey we saw all week.  A link to our eBird checklist is here. After about an hour on land we got back on the boat and headed North.

Our next destination was Kubbar Island which compared to Umm Al-Maradim is much bigger, lower lying and surrounded by clean sandy beaches.  Again there is a lighthouse and plenty of cover for migrants and we were hopeful of turning up something unusual.

En route we rendezvoused  with possibly the best buoy of the day – a bright red creation that was dripping with “splash” and absolutely lifting with terns including a 3 or 4  White-cheeked Terns (WP #712).  These dainty pale grey terns were a major target for most of the participants and were well received as they proved to be  the only ones we saw well all day.

We were in good spirits by the time we arrived at Kubbar whose idyllic beaches seemed to be popular with day-trippers on private yachts who could enjoy a swim and a picnic free from the constraints of Kuwaiti dress codes. Although good numbers of terns were gathering offshore none had returned to nest so we were free to roam the island in search of migrants.  Despite it’s  relatively small size birds moved quickly through the waist high vegetation and were very hard to pin down.  Graham elected to stake out an open area in the hope of some Isabelline Wheatear shots whilst I explored, simply enjoying the migrants but finding little new.  I eventually bumped into Paul and Marc who kindly put me on to a relatively obliging White-throated Robin near the phone mast compound.  The bird hopped up onto an irrigation pipe and posed – I fired off a series of shots – bird flue – I checked the back of my camera – overexposed due to wrong settings – air turns blue.  Fortunately the bird reappeared around the corner on a rather more natural perch and my equilibrium was restored.

The sequence of events over the next thirty minutes is a little bit hazy which is probably just as well given the mounting levels of frustration I experienced!  Having summoned Graham with the promise of a WT Robin under some sort of control I noticed that the rest of the group was converging on a spot about 200m away.  It transpired that Daniel had found a flava wagtail of the form leucocephala “White-headed” (Western Yellow) Wagtail which breeds in Mongolia, winters in India and is as beautiful as it is rare in the WP. And whilst searching for the wagtail the group had found a “Lesser” Whitethroat that AbdulRahman identified as a Hume’s Whitethroat equally as rare, hard to identify and a full fat WP lifer for everybody on the tour.  By the time I got there the wagtail had disappeared and the warbler had melted away into the vegetation giving very brief and tantalising partial views.  After a few minutes it appeared very for a few seconds in from of Jim and and Graham  only to disappear again as the group moved to join them.  At which point most folk seemed satisfied and moved off whilst I stayed to try and relocate both birds without success although a very smart Syke’s (Western Yellow) Wagtail was some compensation.

Whilst not seeing the Hume’s Whitethroat was frustrating – missing a drop dead gorgeous male White-headed Wagtail would be absolutely criminal and things almost got worse  Unknown to me, as Graham had the radio, the others had relocated the wagtail – as I ambled over  towards the group I met Graham who casually passed on the news as he headed back to look for the WT Robin  In the event the wagtail flock had not gone far and Anders and Jim were at hand to help relocate the leucocephala before leaving me in peace to enjoy it- which I did and for the second time in an hour calm was restored.  A link to our eBird list for Kubbar Isand can be found here.

In truth I got a bit carried away with the wagtail and lost track of time, then got distracted by a “Lesser” Whitethroat playing hide and seek and was last back to the boat.  Apologies were in order as it was getting late and everyone was eager to depart as we had one more target on the way back to port.  Socotra Cormorant is endemic to the Persian Gulf and whilst it is relatively easy to see in the UAE and Oman, Kuwait is the only place it regularly seen in the Western Palearctic and even then it is no means certain.  As we got closer to shore we started checking a series of fixed navigational features – the third one we approached had two cormorants perched on the whitewashed railings – one Great with pale underparts and a yellow chin contrasted markedly with an all black bird with a thin bill and very kinked neck; Socotra Cormorant (WP #713).  As we manoeuvred closer the birds took off and the Socotra did a couple of laps of the boat allowing us to take in its distinctive flight silhouette.

The sun was going down as we approached the harbour and everybody was getting very tired after an epic day of rare seabirds and hunting scarce migrants – I somehow managed the long drive home in heavy traffic, but it was almost 8pm by the time we reached the hotel and I was absolutely knackered and ravenous.  We decided to give the Egyptians a miss and order a takeaways to be delivered to our rooms ASAP and I am still amazed that I managed to finish mine before falling asleep ahead of another 5.30am start- but oh well – at least Graham would be driving!