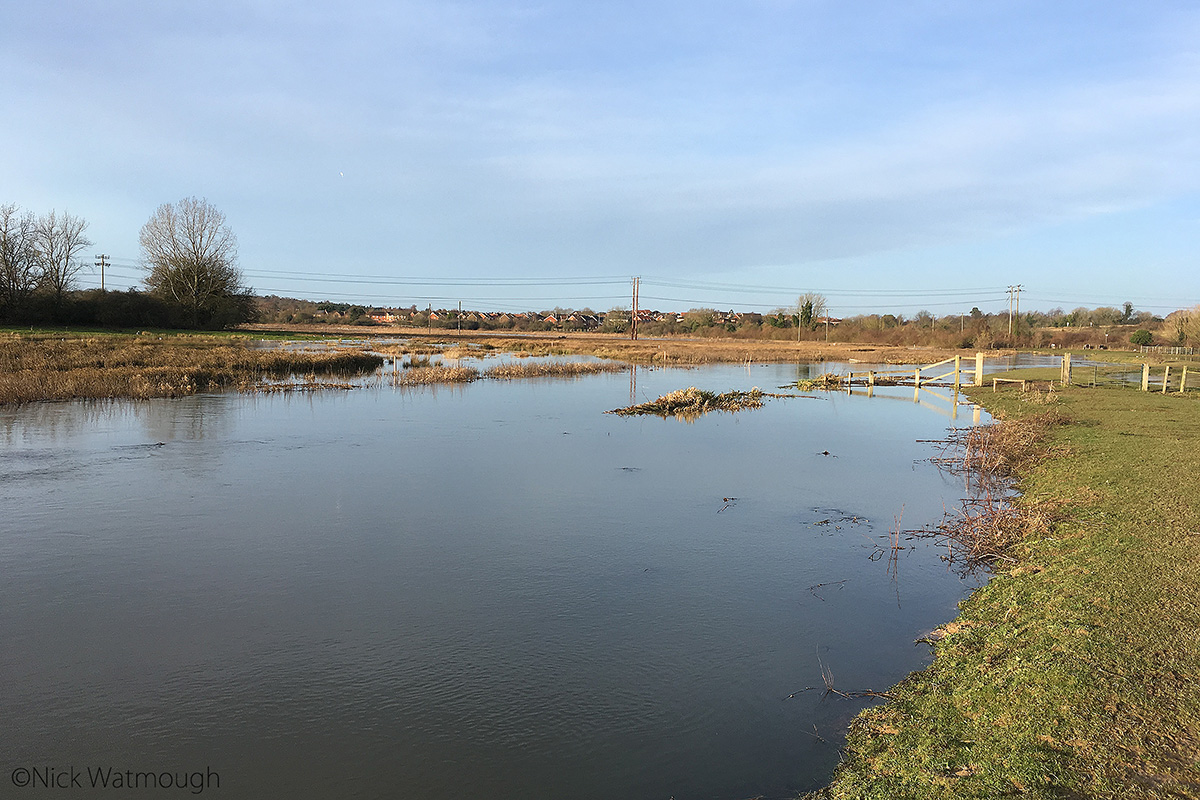 For birdwatchers across the world New Year’s Day is a day of anticipation and renewal, the day when year lists are reset to zero, plans laid for the coming twelve months and attempts are made to see as many species in a day in a defined area. Except in 1988 when on NYD most of the UK birding community descended on the Dorset/Hampshire border with the sole intention of adding Little Bustard to their British List and this was one New Year party that my good friend, the late and much missed, Keith Regan and I did not want to miss out on.

The snag was that New Year’s Eve is a big deal in the North East of England so some delicate negotiations were required in order to excuse ourselves from from the planned first footing and other alcohol fuelled celebrations and drive through the night to rendezvous with Mike Watson and Stuart Warren in Letchworth before going on to Dorset.  Stuart who had recently returned from his African honeymoon was the ideal person to drive the second leg as not only did he clock up significant miles in his day job, but he had also piloted Mike and myself around Turkey two years previously. Ominously when we piled into Stuart’s car to head South-west it was already raining!

When we arrived round dawn we knew we were in the right place as it was hard to navigate the narrow lanes because of number of cars that had not so much been parked as carefully abandoned on verges;  no polite messages from Birdguides asking you to park nicely in those days!  And as we joined the throng at the edge of the field in which the bustard had been seen at dusk on NYE it was still raining, heavily and persistently.  As is the custom on these occasions, there was much anxious and good natured chat as we got progressively wetter waiting to the bird to appear. Stuart was on particularly good form telling anyone who was interested about the various species of bustard he had recently seen in Africa and in doing so made the schoolboy error of leaving his binoculars uncovered.  Consequently when it was agreed that a couple of locals would put us out of our misery and entered the field to coax the bird into view his eye-cups were full of water and as the bird was flushed he didn’t see it.  It is never comfortable driving back from a twitch when one person in the car does not see the bird, but when it is your driver….  Needless to say we drove back to Letchworth in near silence uncomfortably damp in a car that was starting to reek of wet Barbour jackets in a way that was going to provide Stu with a painful reminder for days to come.

In recent years my NYDs have been more sedate and spent birding close to home. In 2007 my daughter Kat, then aged 9, and I decided to see how many species we could see within 3km of our house in West Norwich. We managed just 40 but until last year (2017) when Kat and I were in Japan I had repeated the count every year with a best total of 51 in 2011 and a cumulative total of 75. So when, after the recent heavy rains, NYD 2018 dawned with clear skies I was looking forward to reacquainting myself with the circle. Species are listed in order of addition (#1) with those seen on two or fewer of the previous ten counts in blue text.

Adding the first species is always easy.  I drive to the end of our cul-de-sac, turn right down the hill and park at the estate entrance where there is a colony of House Sparrows (#1).  Next, in time honoured fashion, I cruised slowly along Bluebell Road and the fringes of Eaton Park  clocking up the expected suburban species; Carrion Crow (#2), Wood Pigeon (#3), Blackbird (#4), Collared Dove (#5), Magpie (#6), Starling (#7) and Robin (#8).  A quick stop by Eaton Park boating lake added Black-headed (#9) and Common Gull (#10) along with Chaffinch (#11) and Goldfinch (#12). The list was further incremented by Feral Pigeon (#13) on the short drive to West Earlham Marsh.

Arriving in Bevan Close I found the marsh full to the brim and pretty much birdless apart from a few Mallard (#14) on the water and  a couple of Wrens (#15) chasing each other in the rank margins.  Moreover the path leading from St Mary’s Church, Earlham, to the bund next to the River Yare was impassible.  So after adding Song Thrush (#16), Dunnock (#17) and Blue Tit (#18) in the thicket by the kissing gate I drove the the Northern entrance and re-parked.

Despite the  extensive flooding the bund was still accessible here and as soon on reaching the river I added Moorhen (#19) whilst Pied Wagtails (#20) and Meadow Pipits (#21) flew overhead. The mass of open water meant that the flock of dabbling duck had dissipated, but it did not take long to find a few Eurasian Teal (#22) and the expected Jackdaws (#23) feeding on the margins as a Great Cormorant (#24) flew high over the estate.  Herring Gull (#25) and Grey Heron (#26) were soon added. Green Woodpecker (#27) was another flyover whilst a Grey Wagtail (#28) briefly joined its Pied cousins on the soaking grass. Further examination of the floodplain did not uncover the expected Snipe, but it did give me  Little Grebe (#29 ), Little Egret (#30), not seen before 2013 but now annual, and Lesser-black Backed Gull (#31).  Best of all it was only 10.30hrs and I had not seen a slew of common woodland species. Surely the record of 51 was there for the taking!

Or maybe not! My next stop by the Spire Hospital only added Great Tit (#32). Then  in a moment of inspiration (or hunger) I decided on a short diversion to the new McDonalds on the Thickthorn roundabout.  This required me to drive a route that always has feeding Rooks (#35) and some rough ground that usually has a hunting Kestrel (#36) and as I pulled into the car park by Cringleford Wood with my coffee and breakfast wrap  a Common Buzzard (#37) soared over the UEA campus.  Whilst the wood itself did not deliver the expected Goldcrest, Long-tailed Tit (#38) , Coal Tit (#39) and GS Woodpecker (#40) were all seen in quick succession and I did not hang around. Continuing across to the West end of UEA Broad I found a pair of GC Grebes (#41) with beaks full of weed dancing like a pair of “Strictly” finalists with a single Coot (#42), the first count record since 2011, for an audience.   No Mistle Thrushs at the back of the Sainsbury Centre,  but a Mute Swan (# 43) on the river by the playing fields and a Jay (#44) kept the total ticking over Walking back to the car gave via Lusty Hills gave me a bonus Bullfinch (#45) and I was able to persuade a solitary Goldcrest (#46) out of the New Plantation before deciding on my next move.

Which was to drive to Intwood at the southern limit of the circle where there is a patchwork of small brooks and wet fields that have always looked good for a wintering Green Sandpiper or Jack Snipe.  Back on Planet Earth Egyptian Goose (#47 ) and Mistle Thrush (#48 ) were a good return, but still no gamebirds.  In past years the arable fields viewed from the back road that leads from the B1113 to the Hartford Park and Ride have been a reliable spot for Red-legged Partridge. Not today but they did deliver a few Stock Dove (#49) mixed in with a sizeable flock of Fieldfare (#50 ) and a Pheasant (#51 ) that was prepared to risk the NYD shoots. Before pausing for lunch I had one last attempt for Red-leg at the back of Keswick Mill that ended in failure, but even that was OK when I broke my record with a Reed Bunting (#52) that popped up in a low hedge.

It was now 13.30hrs and even allowing for tea and toast there was two hours in which to target gaps and add to the total  First stop was the boardwalk that runs along the Yare at the east end of UEA Broad which was under water where there were none of the hoped for Carduelis finches, but two Kingfishers (#53) flashed their sapphire butts as they played tag in the lakeside vegetation.  Next stop was Earlham Park where a  Nuthatch (#54) was calling atop a big tree.  After a quick and unproductive walk around the park I returned to West Earlham Marsh to see what might turn up at dusk. After 20 minutes of seeing nothing new and getting ever colder in fading light a Sparrowhawk (#55) appearedout of nowhere and raced low over the marsh.  Content I started back to the car and was almost there when a Water Rail (#56) jumped out of a patch of riverside scrub and back.  As I thawed out and headed for home I reflected on an excellent day where everything had gone to plan and once again my mind wandered back to NYD 1988.

After saying our rather awkward farewells to Stuart,  Mike, Keith and I headed over to Salthouse in North Norfolk to stay in the bunkhouse that Steve and Liz Harris (now of BIRDscapes Gallery in Glandford) ran at the time with a view to seeing two rare geese; Red-breasted Goose and Black Brant.   These were scored the following day with Keith memorably taking his bacon and egg to a telescope set up by an upstairs window so that he could tick RBG whilst eating a full English. Those two days 30 years ago, in which everything went to plan (well at least for three of us) were the start of  an annus mirabilis.  This included a memorable early spring trip to Israel, a string of outstanding British and Irish rares including Caspian Plover and Yellow-bellied Sapsucker that ended with a Boxing Day American Robin in Scotland (after yet more negotiation).  Along the way I submitted my PhD thesis and found a new job in Colorado.  After such a a positive start to 2018 I wonder what the rest of the birding year will bring?