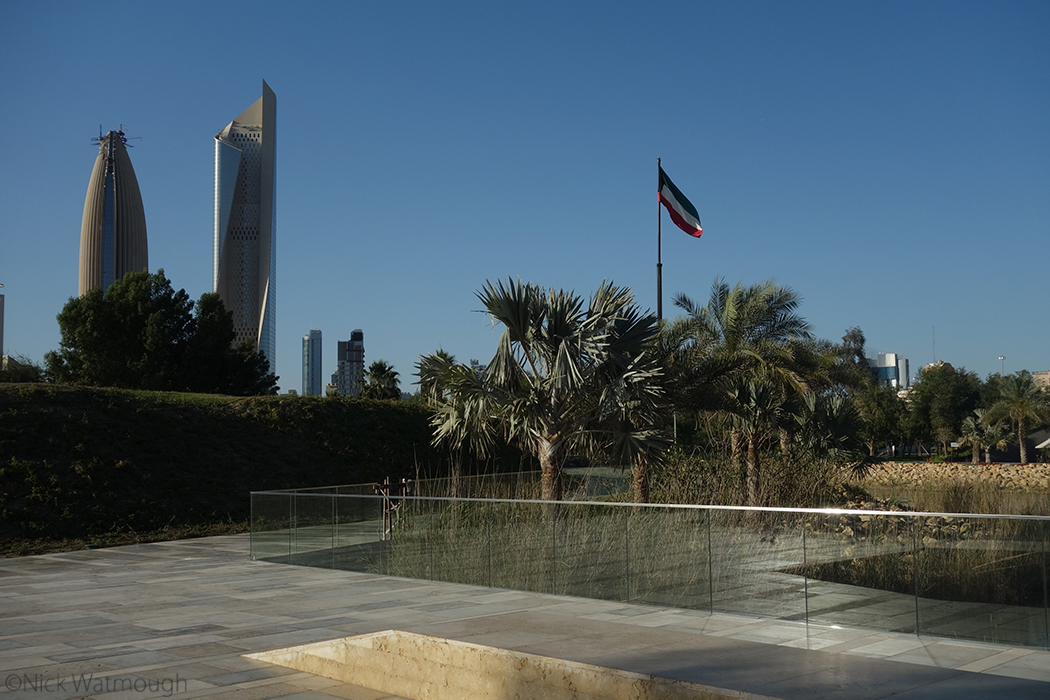 Having enjoyed a trip to Western Sahara last April Graham Clarke and myself were keen to extend our experiences of desert birding during spring migration. This time our destination was Kuwait; the tiny oil rich Gulf state that lies on the Eastern edge of the Western Palearctic where we had arranged to participate in a seven day tour organised and led by local birder AbdulRahman Al-Sirhan.

Although I had not visited Kuwait before it had featured in my birding past. In August 1990 when I was working in Denver Colorado the then Prime Minister Margaret Thatcher was scheduled to speak at the Aspen Insitute. Her visit was being covered for the Mirror newspaper by David Bradshaw who had arranged to meet up with me for a couple of days birding in the Rockies after the conference. On August 2nd Sadaam Hussain invaded Kuwait, Bush and Thatcher’s initial response to this act of aggression came at a news conference in Aspen. When the conference finished David was understandably required to follow the leaders back to Washington and report on the emerging chain of events which led to the Gulf War put an end to our birding plans. Naturally I never imagined that 30 years later I would be visiting the site of this tragedy on a birding trip.

We drove down to Maidenhead on the afternoon of 11th April and left the car with my sister before taking a cab to Heathrow Terminal 5. Baggage drop and security were straight forward and gave us plenty of time to sit down and have a meal before boarding our overnight flight to Kuwait City. I managed to sleep through most of the six hour flight, Graham was not so fortunate. Approaching the airport overnight cloud and rain were clearing from Kuwait City conditions that looked good for seeing grounded migrants. Despite limited/lack of sleep we were eager to get started although a short frustrating delay to process our e-visas followed before we met AbdulRahman who took us to the Continental Inn in nearby Farwaniya; a very serviceable business class hotel that was to be our base for the next eight days.

After taking luggage to our rooms there was time for a quick shower and breakfast before we joined French WP birder and photographer Daniel Mauras for a day of independent birding around Kuwait City helped by a driver and packed lunch very kindly organised by AbdulRahman at no additional cost to the tour which was to start the following day.

Our first destination was Al-Shaheed Park which is the largest urban park in Kuwait that combines well tended and watered gardens with a celebration of Kuwaiti heritage. Our driver left us in the underground car park and arranged to collect us 3 hours later which gave us an opportunity to introduce ourselves to the common birds of Kuwait, a number of which have been introduced and have established self sustaining populations. It is absolutely fine to count these Category C species on your WP list (for guidance see Paul Chapman’s guest blog “Last Chance to C” on the WP Big Year site). That didn’t stop Graham reminding me that these exotic species with zero vagrancy potential are referred to by Irish birders as “gank”. It turned out that in addition to the very common House Sparrows and Collared & Laughing Doves Al-Shaheed park was home to three species of gank; all of which were new for my WP list!

As we walked the park perimeter, separated from a busy six lane highway by a narrow metal fence, we picked up our first migrants, Rufous Bush Robin, Masked Shrike and Lesser Whitethroat, amongst the manicured tree and shrubs. Against the backdrop of the imposing skyscrapers the local Pallid Swifts swooped low and a Mon/Pal harrier passed overhead. At this point I became separated from Graham and Daniel who found a Turkestan Shrike – fortunately it did not take me long to catch up either with them or with this much wanted and long anticipated lifer (WP #706). Further interest came in the form of an Eastern Olivaceous Warbler hopping around a rock garden.

By late morning it was getting rather hot, we were tired from the overnight journey and as a consequence not finding many new birds. However towards the end of our stay we did flush a male White-throated Robin from the base of some shrubs. He was very nervous and regularly disturbed by joggers and other park users so we were never able to get close. A real shame as this was not only one of Graham’s most wanted birds, but also the first I had seen since I was in SE Turkey in 1986; we hoped that it would not be our only sighting of the week!

A summary of the morning’s observations can bCe found here.

We met our driver as planned and enjoyed the air-conditioned car and a packed lunch as we relocated to Jahra farms; an extensive area of small holdings next to a shopping centre in the small town of Jahra on the northern edge of the Kuwait City conurbation. The farms, which are irrigated from a single well, are worked by hand to provide fresh herbs and salad leaves for local businesses. Arriving around 1pm we agreed with the driver that he would pick us up at 6pm and although five hours seemed a long time to devote to the area bird activity was low in the intense heat, something we hoped might change by late afternoon.

There were a few migrants, Willow Warblers and Redstart, in the first area of plots we looked at. Moving to the second block of fields we found that a couple of plots had been deliberately flooded in preparation for sowing and were proving very attractive to the local Mynas – mainly Common, but also a few Bank Myna (WP #707).

Migrant wise we continued to struggled in the heat of the day adding only Blackcaps, another Redstart and a very jumpy Wryneck whose nerve were not helped ny the temporary appearance of a couple of hunters. A few Swallows flew through and the local Smyrna (White-breasted) Kingfisher made itself known, but it was hard work and both of us eventually succumbed to the need for a nap.

As the heat finally started to abate Graham picked up a female Ficedula flycatcher near the farm entrance. Date and location suggested Semi-collared a species I had only seen twice before and each time a single adult male. We were not disappointed although securing a decent image proved challenging in the strong light as the bird did not allow close approach and we both had elected to bring our more portable 100-400mm zoom lenses for this first day.

Satisfied we returned to the original block of fields but added no new migrants save for a couple of Tree Pipits – although the Smyrna gave us a somewhat better view before it was time to rendezvous with the driver and bring a successful day’s birding to a close. A summary of our sightings from the afternoon can be found here.

After returning to the hotel we just had time to freshen before meeting AbdulRahman to revisit the airport and collect the two 4WD hire vehicles that we were going to use for the tour. Eight participants plus AbdulRahman required two cars and Graham and I had agreed to drive the second vehicle for the duration of the trip. I drew the short straw and got to drive our Landcruiser Prado back to the hotel in the evening traffic; very different rules apply on Kuwait’s congested roads to those in the UK. Having survived this baptism of fire it was time to get something to eat in a local Indian restaurant before turning in ahead of our 05.30 start the following morning.