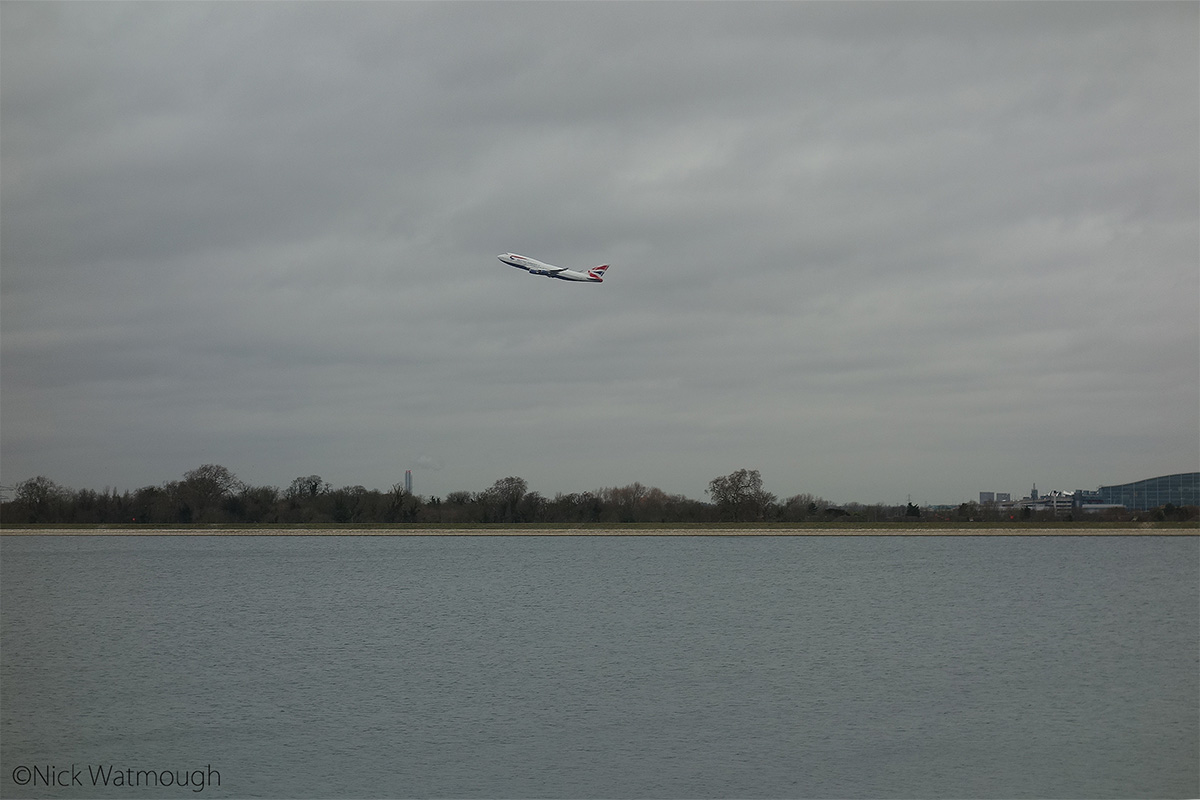 I had to visit my Mother and Sister in Maidenhead on Saturday 27th Jan which gave me the chance to pay a brief visit Staines Reservoir in Surrey to see an American Horned Lark which was found in late November, disappeared after a few days, but re-emerged in the early part of the previous week.  Staines lies pretty much at one end of Heathrow’s runways and is essentially an enormous water-filled concrete bowl bisected by a raised causeway whose weedy slopes have provided food and shelter for this vagrant lark.  I arrived mid-morning, parked the car by the ramp to the causeway, settled my doggie travelling companion in the back seat and set off.  The bird was feeding on the south slope below the furthest viewing bay separated from its observers by a 1.5m barred metal fence that made photography challenging, but not impossible and with patience it was possible to get some decent images.

Horned Lark, (aka Shore Lark)  is a species that is widely distributed across the Northern Hemisphere with some forty different races described on the basis of variations in plumage and biometrics.  It has been proposed that the  Old World forms should be treated as five different species and the North American forms, of which there are >20, as a sixth   There is useful summary and discussion of this work on the Birding Frontiers site.  The main question for anybody going to see the Staines bird are whether on the basis of plumage it can be assigned to one of the of the North American forms rather than the familiar yellow faced form Eremophila alpestris flava which winters in small numbers around the UK coast and currently the only one on the British List. A secondary issue, is whether in he fullness of time the North American forms might be split as a separate species and allow our British and WP lists to advance by one!

All Horned larks share the same basic facial pattern of a black mask and choker with supercillium, forehead, cheeks and chin being yellow and/or white depending on race. Clues from the plumage to the Staines bird having a Nearctic origin come from the heavily streaked mantle,  pinky-rufous flanks that contrast with the white belly, the heavy striking on the lower breast and the strong pinkish component to the shawl (rear nape, upper mantle – this coloration should extend onto the lesser and median coverts, but this was hard to see on as the bird stayed hunched as it shuffled around in the strong breeze and never stood upright and alert. These pinkish tones are even more pronounced  in some other North American races for instance Eremophila alpestris leucolaema; the non migratory race of the interior West that I know from my time in Colorado

Candidate Horned Larks in  the Western Palearctic have previously been reported in Iceland (Birding World (1999) 12: 375-376.), in Northern Ireland (Birding World (1999 ) 12: 152-154) and on Scilly in Oct 2001 (Birding World (2002) 15: 111-119 and Surfbirds).  All of these were tentatively attributed to the large, long-winged, migratory NE race E. a. alpestris  and images of the Iceland and Ulster birds in the BW articles suggest that the yellow parts of the head to be deeper in tone that flava as indicated by Nils van Duivendijk in his Advanced Bird ID Guide.  The images of the Scilly bird are less compelling in that regard; that bird having a white rear supercilium and pale ear coverts.  Needless to say that whilst writing this I am regretting not making the effort to go over to St Agnes and see it for myself when I had the opportunity during a Scilly long weekend in October 2001!  Nevertheless, for what it is worth, the yellow in the face of the St Agnes bird the is more intense and extensive than on the Staines individual.

So where does this leave us?  In his comprehensive Birding World and Surfbirds articles Brian Small discusses another large and highly migratory race known as Hoyt’s Lark (E. a. hoyti) that breeds in the high arctic to the West of  E. a. alpestris. Brian’s description and painting suggests that hoyti is quite similar to alpestris with the major difference being he intensity of streaking on the lower breast.  It was therefore with some considerable interest that I came across this short article by John Ruddy on his Eastern Ontario Birding website with some images of a candidate Hoyt’s that he had seen among wintering alpestris  and some comparative images of museum skins of the three forms that occur in Eastern Ontario;  alpestris, hoyti and praticola plus an additional reference to an article written by Ron Pittaway in Ontario Birds from 1994.

These Canadian articles suggest that hoyti is a rather distinctive pale race with a white supercillium and just a daffodil blush on the throat – very much in keeping the facial pattern of the Staines bird.  But neither  article mentions the extensive lower breast streaking that the Staines individual clearly exhibits.

This left me wondering to what extent appearance is is related to age and/or sex.  The ID  Guide to North American Passerines by Pyle an others suggest that it is a female (white admixed with black in the mask, no black forehead) but it would have completed its annual moult by Sept if a first calendar year bird and earlier if an adult.  It is hard to see that heavy streaking just disappearing by feather wear.  So whilst there is no doubt of a North American origin for the Staines Horned Lark assigning it to race, even with biometrics, may not be possible.  I suspect that obtaining a DNA sample may not help given that one of the commentators on Ruddy’s article  reports seeing many intergrades between alpestris and hoyti in the Hudson Bay area of Central Canada. Hopefully with ever more observers going to see this smart little bird there will be further discussion and perhaps more information will come to light.

As a footnote this was only my second ever visit to Staines Reservoir.  The first 35 years ago was to see my first Baird’s Sandpiper that had overwintered on the muddy edges to one of the drained basins. Like Horned Lark Baird’s Sandpiper is a species that I would got to know well when I lived in Colorado where it is by far and away the commonest Calidrid during autumn migration.