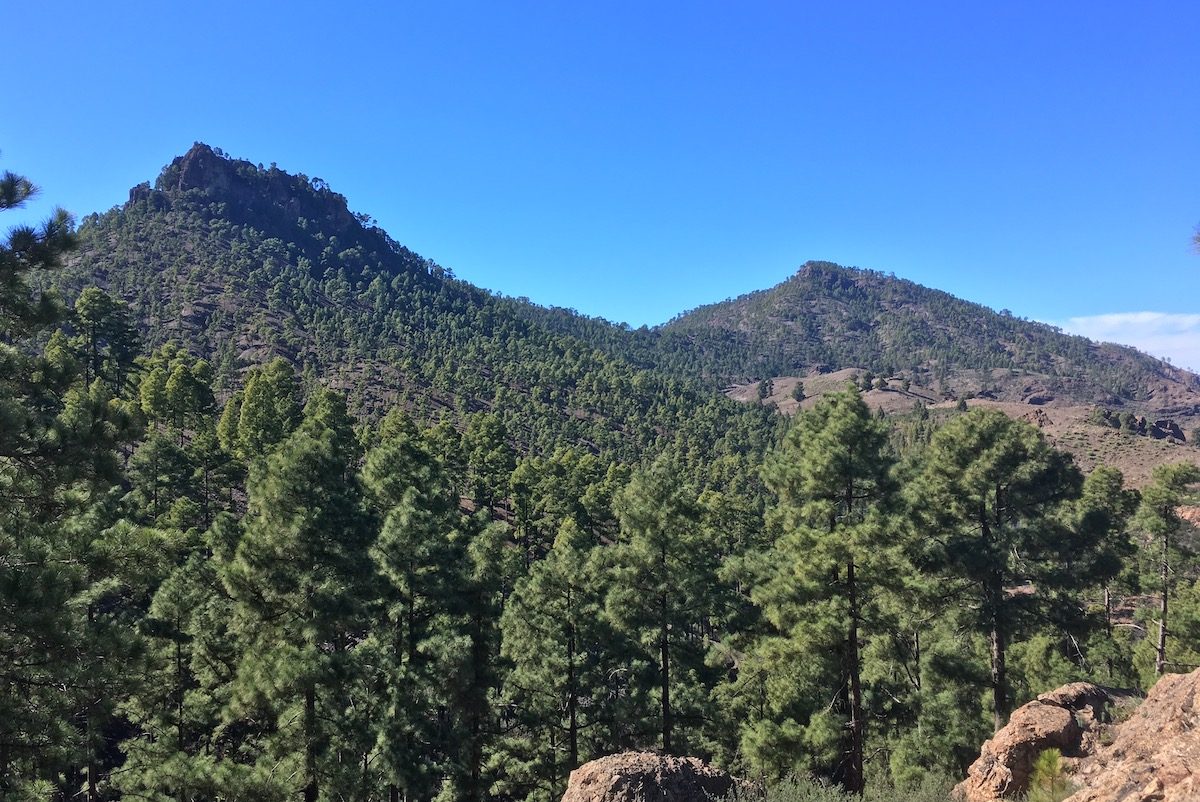 Ingrid and I had planned a post-Christmas long weekend in Gran Canaria to unwind, grab some winter sun and give me the opportunity to see one of the world’s rarest birds <500 individuals); the recently split Gran Canaria Blue Chaffinch.  We flew from a cold grey Stansted on the afternoon of Friday 11thJanuary (Ryanair FR8132 ) and four hours later arrived in Canarian air space as the sun was setting.

Collection of the pre-booked car from the highly recommended, an inexpensive, Autoreisen was straightforward and we were soon speeding south on GC1 towards Maspalomas before climbing the twisting, but well surfaced road `(GC60) to the small mountain village of Fataga where the charming and well appointed Finca Tassomio would be our base for the next three nights.

The following morning after a leisurely breakfast I spent some time in the Finca garden enjoying the local village birds (eBird list here) before we headed to higher elevations and the remaining extensive areas of Canarian Pines where GC Blue Chaffinch can be found.  There are essentially two areas in which birds are seen without too much difficulty. The first is the NE section of Inagua forest and the other a more fragmented area of pines around the tourist attraction of Rocque Nublo. More information about the recovery plan for the GC Blue Chaffinch can be found here.

We headed to the former by carrying on up GC-60 from Fataga as far as the junction with GC-606 and turning immediately on to GC-661 which we took to the settlement of El Juncal de Tejeda and followed the road through the village and over the baranco until the pavement runs out.  The dirt road which continues through the Inagua forest to GC-605 is perfectly drivable, but in deference to Ingrid I chose not to walk and walked the road as far as the point at which the WP Big Year team saw GC Blue Chaffinch in 2017.  Apart from the many vocal Canary Island Chiffchaffs birding was hard work (eBird list here) although there were impressive views across the west of the island towards Tenerife. Interestingly as I gained altitude the amount of broom, on which the Blue Chaffinches forage, in the understory increased and I suspect if I had carried on I would have found more and better habitat.

After a couple of hours we had had enough and we headed back down GC-60 towards Fataga stopping en route for a late and leisurely lunch at one of the many roadside eateries. By the time we got back to the Finca it was too late to head back up to try a different area and I decided to leave another attempt until the morning reassured by a message from Phil Abbott who had seen Blue Chaffinches around the picnic site at Llanos de la Pez.

Sunday morning saw me having breakfast at 8.30 am sharp whilst Ingrid enjoyed a lie in. Again I took GC 60 but this time turned off onto GC 600 (signposted for Roque Nublo). After gaining more altitude and driving for about 2.5km beyond the Roque Nublo car park I  unfortunately mistook a camping area on the right for the picnic site and parked there about 800 m short of the picnic site itself! This caused me some problems especially when I found myself more than 1km from Phil’s coordinates and the batteries in my GPS device getting very low. As I reorientated I flushed a pair of RL Partridges and started to see more African Blue Tits and CI Chiffchaffs. I hit the S51 circular trail and headed South, away from the picnic site, and at the t-junction turned East and followed the trail for about 300 m along the edge of broom filled gully where I tracked down an unfamiliar high-pitched tick to the endemic sub-species (or possibly species) of Robin.

After getting some images I followed the trail back to the picnic area which was by now filling up with visitors and their sound systems and worked my way across the hillside to Phil’s coordinates, an area of pines with extensive broom understory, which gave an excellent view of the canopy. Lots of the local race (ssp canariensis) of Chaffinch and a Buzzard flew over head, but still no sign of my target bird and my morning pass was rapidly running out. Resigned to failure I dropped down the hillside and walked along the edge of the picnic area just 50m or so from the road where I disturbed a small flock of Atlantic Canaries foraging in the broom.

I stopped to photograph a reasonably obliging male and turned to see more finches in the next patch of broom one of which gave the call that I had familiarised myself with over breakfast. The perpetrator flew up into a nearby pine and revealed himself as a GC Blue Chaffinch (WP#701). This was one of three birds in a loose mixed flock of finches which with some patience and despite the clock having turned red came close enough for me to get some images.

More than content I returned to the car adding Raven and Great-spotted Woodpecker (ssp thanneri ) on the way to complete my eBird checklist. The traffic on GC 60 was not too bad and I arrived back in Fataga less than half an hour late and in good time to enjoy a lazy lunch on the terrace of one of the village restaurants.

The rest of the trip was uneventful and relaxing and we returned to Stansted (as cold and grey as when we left) the following day (Ryanair FR8133) having thoroughly enjoyed the sun, scenery and food of interior Gran Canaria.