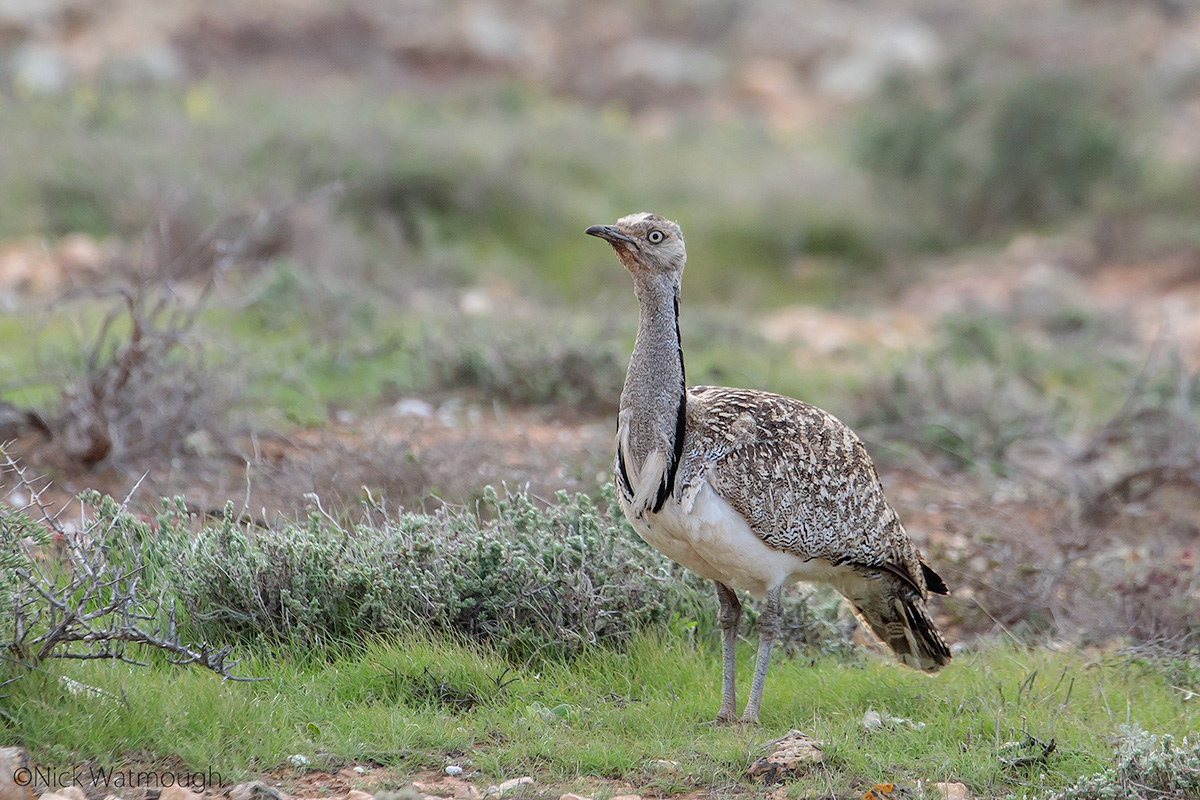 When we got up the forecast rain was already in the air. After grabbing a quick breakfast in a Tindaya bar we headed out onto the plains to make the most of the early morning light.  A Berthelot’s Pipit was feeding alongside the first rough track we explored, but we saw nothing else and returned to the tarmac when the track petered out.

A Great Grey  Shrike on a roadside post was typically nervous so we moved on until after a further 500 m we literally tripped over a party of 4 Houbaras; two of which walked across the road in front of us.  Taking Robin Chittenden’ s advice we parked the car, used it as a hide and simply allowed one individual to walk towards us until it was quietly feeding  just 50m away.

Houbara Bustard of the

After 30 minutes spent feeding our memory cards we reluctantly moved on picked up some provisions and returned to the Barranco de Rio Cabreas for another go at the Dwarf Bittern. Perched up on the side of the gorge we waited for just 40 mins in deteriorating conditions when two recently arrived birders further down the ravine gestured that they could see our quarry.  After further gesturing and some frantic triangulation we located the bird and managed a couple of record shots before the heavens opened and we had to retreat to the car.

In an attempt to outrun the rain we decided to head South to the wood at Costa Calma and search for wintering passerines,  The car heater was  turned up to maximum in an attempt to dry outbut when we arrived in Costa Calma about an hour later we were still a touch damp.  The “wood” is in fact two strips of parkland each about 1 km long and neither more than 100 m wide that run parallel to the beachside hotels.  As we walked through the western strip we found a motley collection of refugees from the European winter including 15 Song Thrushes, 2 Siskin, a  Redwing and a Brambling (a Canarian rarity)  before encountering one of our target species; a group of 3 Little Buntings feeding on some dry under story.

Walking to end of the strip we found a few more Song Thrushes and Chiffchaffs before turning back and bumping into a visiting birder from Gran Canaria who had seen a Yellow-browed Warbler and gave us directions to the Olive-backed Pipits which had relocated to the other strip.

Following his directions we soon located a party of three OBPs which gave nice views despite the footfall through that section of the park.  By now the sun was out and with our mission accomplished we set off back off to the North West of the island.

The Embalse de los Molinos is probably the largest stretch of fresh water on Fuerteventura and as such is something of a magnet for visiting birders.  As we got out of the car there were swifts, this time Pallid, overhead and a departing birder mentioned a Marbled Teal.  We eventually caught up with this duck at the far end of the reservoir along with ca 20 Common Teal, a couple of Mallard and a female Tufted Duck, but it was quitter hard work without in the strong wind and without a telescope.  Amongst the other common water birds, Coot, Little Egret and Spoonbill, were a few Greenshank, a couple of Common Sandpipers and a Black-headed Gull.  After an hour or so the sun was going down behind the mountains, it was noticeably cooler and time to go.  On the way home we chanced upon the very pleasant La Cancela Restaurante in the small town of Tefia where we enjoyed some local specialities.  Feeling better for something to eat will stocked up on supplies for the next day at a supermarket between La Oliva and Villaverde before heading back to the apartment for the night. 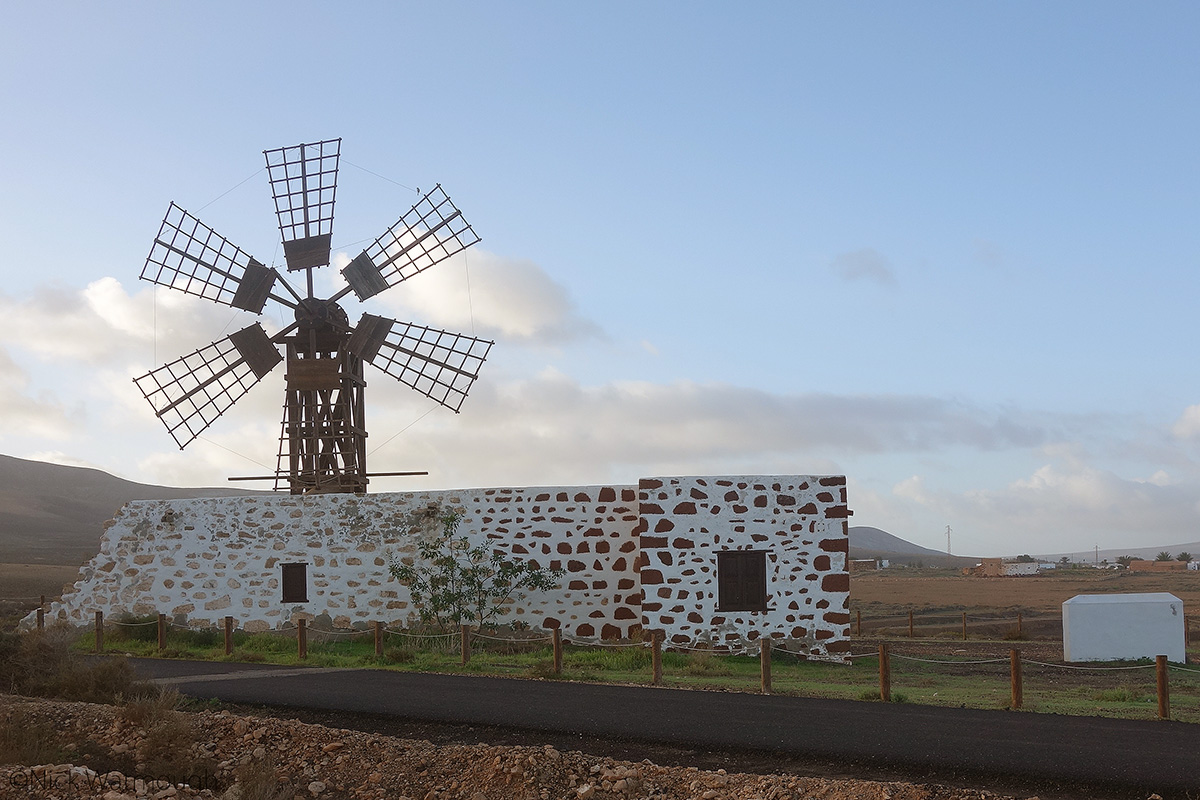 Family commitments had made it impossible for me to join the steady stream of Western Palearctic listers who, since December, had made the trip to Fuetereventura to twitch a Dwarf Bittern (a tiny African heron that is incredibly rare in our region) and enjoy some Macronesian endemic and scarce wintering species in the sun.  The first weekend in March was my best chance and despite the efforts of the “Beast from the East” and Storm Emma to derail the plan I had a straightforward, if bitterly cold, journey down to Barton Mills in the early hours of 2nd March to rendezvous with  Sue Bryan and then on to Stansted. Our Ryanair flight, reassuringly dripping with antifreeze, departed more or less on time and by midday we were in the warm Canarian sun collecting a hire car, which was a definite upgrade on the requested Ford Fiesta.

After a brief stop for fuel and water we headed North-West to the segment of the Baranco de Rio Cabrea that had hosted the Dwarf Bittern for almost three months.  The car was parked by the entrance to a land fill site that was swarming with Yellow-legged and Lesser Black-backed Gulls with a supporting cast of Common Ravens Common Buzzards, Egyptian Vultures and Grey Herons.

We tramped 300m across a stony plain flushing a pair of Lesser Short-toed Larks as we went before locating the breeze block cairn that marked the path down to the bottom of the barranco.   As we descended into the gorge there were Ruddy Shelducks in the stream below and Trumpeter Finches calling everywhere..

The vegetated floor of barranco was very birdy; Hoopoe, Green Sandpiper, Little Ringed Plover, and a pair of indigenous Fuerteventura Chats  that were actively collecting food for their brood.

After a couple of hours I picked up a tiny heron flying towards us that had been flushed by two birders working the upper part of the Barranco. The Dwarf Bittern carried on past us and dived into a thick clump of tamarisks.  We relocated to the opposite side of the gorge. As we waited we noted African Blue Tit, Spectacled Warbler and a noticeably green and yellow Phylloscopus warbler with contrasting white underparts and yellow supercilium that appeared a good candidate for Iberian Chiffchaff. This species is not on the Canary Islands list and unfortunately it was silent and I got no images.  Even more unfortunately the Dwarf Bittern didn’t emerge until the couple who had originally disturbed it  approached our vantage point and inadvertently flushed it again this time out of view from us and none of other three observers were able to see where it landed.  By now it was now late afternoon and after one more brief search overseen by a party of Plain Swifts we decided to cut our losses and head over to the Tindaya Plains to search for Houbaras.

Shortly after leaving the village of Tindaya we located a single very distant male Houbara displaying in the rapidly dimming light. As we continued further down the track four Black-bellied Sandgrouse crossed in front of us offering close views.

Content we pressed on a further a 200 m or so when Sue picked a Cream Coloured Courser in the gloaming which turned out to be one of three birds. Repositioning the car allowed for a short high ISO photography session with the closest individual before the light packed up it was time to go and find our digs in nearby La Oliva.

After checking into our accommodation we walked into time to find something to eat only to find the local pizzeria was shut.  A local bar doubled as a greasy spoon and although the food was indifferent there was cold beer to toast an excellent first afternoon! Feeling better for something to eat and drink we returned to the apartment where I fell asleep as soon as my head hit the pillow impervious to the sound of Stone Curlews in the surrounding fields.