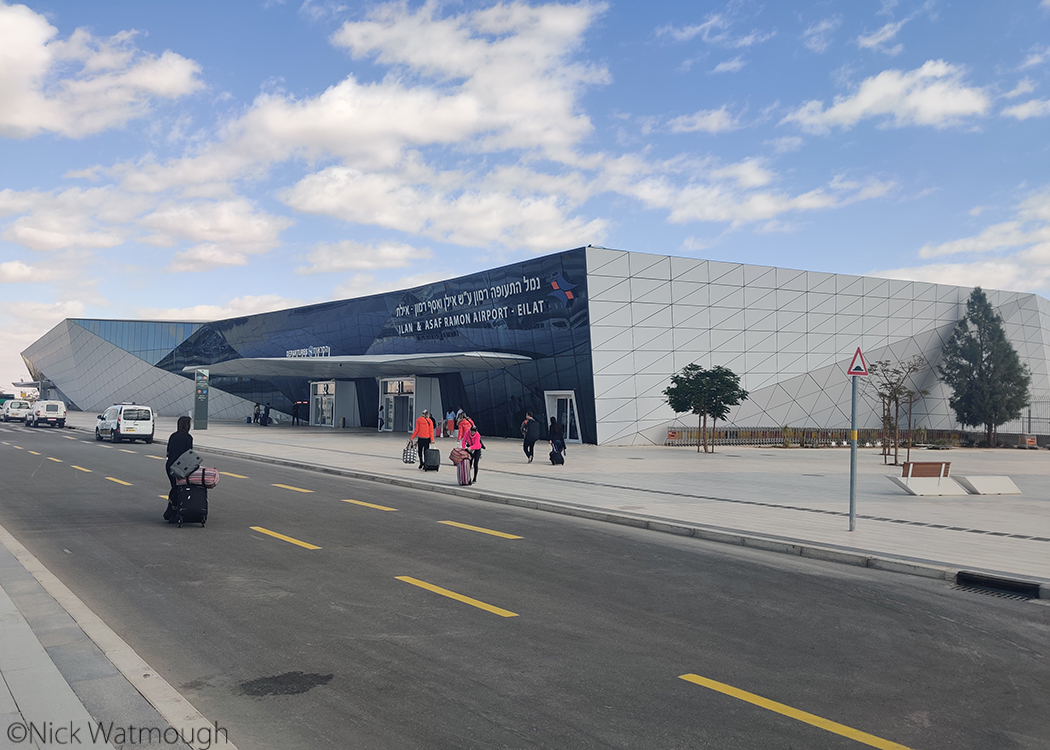 Ingrid and I flew to Amsterdam on New Years Eve and spent the night at an airport hotel. Early the next morning we flew to the newly constructed Ramon Airport just North of Eilat. However it did take two attempts. The first flight returning to Schipol after an hour because a sensor warning light came on in the cockpit. Consequently we arrived after dark and took a bus (runs every 30 mins) to our hotel near the Coral Beach. I was excited by a return to southern Israel 25 years after our last visit. Although I had no idea that an unexpected visitor from Africa was going to make the first day especially so.

After a good sleep and breakfast I took a bus into town to collect a pre-booked hire car. Two things I should have done at the same time. First use one of the ATMs in the centre of town. These recognise UK debit cards and issue small denomination notes. Seconly buy a local SIM card ca £20 for all the data you will use in a week (or even a month!).

When a new bird is not a tick!

I collected my gear and drove North thruugh Eilat noting the much changed skyline around the North Beach. I turned off East towards the Wadi Araba Border Crossing into Jordan and the Eilat Ornithological Park.

The park which serves as HQ for the IBRCE (International Birding and Research Centre Eilat) is undergoing a makeover. Improved trails and hides will enhance the experience for coachloads of tourists who come to learn about the work of the centre. The purpose of my visit was twofold. First of all to pick up some information on the scarce wintering species in the Southern Arava. Secondly to try and see one the 5+ Oriental Honey Buzzards that were wintering in the area. I completely failed on the OHBs but enjoyed some of the common wintering species. Both around the park and on the adjacent saltpans.

Just as I was leaving I saw a tweet about an African Crake that had been taken into care in Eilat!! A real WTF moment. That on day one of your trip a species with <15 Western Palearctic records has arrived on your doorstep. But! To cut a long story short the African Crake (a species in the same genus as Corncrake) arrived at the IRBCE in a bag. Found in a city garage and rescued from a cat it was lively but injured. Quite rightly it was taken into veterinary care, but not before a photoshoot.

Regrettably I cannot count African Crake on my Western Palearctic list. Listing birds is a personal thing and even more so in the WP because, like the UK constitution, the rules are unwritten. However for consistency I choose to follow the principles used by the American Birding Association for their recording area.

Evening on the saltpans

After the excitement of the crake I drove a little further North to the saltpans at Km20. It was now late afternoon and looking over the saltpans towards Jordan the light was excellent. Greater Flamingos are the stars of the show here with three big flocks totalling about 450 birds.

Including the long-staying melanistic individual.

Waders feeding in the shallow edges to the saltpans included Redshank, Marsh Sandpiper, Little Stint, Dunlin and both Kentish and Ringled Plovers.

By now the light was starting to go. After a couple of false starts I found the gap in the fence that allowed entry to the Km19 sewage works. In the time I had left I didn’t manage much beyond the exptected herons and duck. Although overhead were some impressive flights of Greater Cormorants heading south from I don’t where to a roost site at the coast. As dusk fell I called it a day and headed back to Eilat for an excellent dinner at a local seafood restaurant.